Sleeping without the boot

My goal for Week #7 was to sleep without the orthopedic boot. Though my Achilles tendon is strong enough for nighttime injury to not be a concern, it’s psychologically tough to overcome when I’ve been in a cast or a boot for the previous six weeks.

For two nights, I started off without a boot, but eventually put it on. I could not fall asleep with my foot and leg unprotected. So I ordered a product known as a night splint. 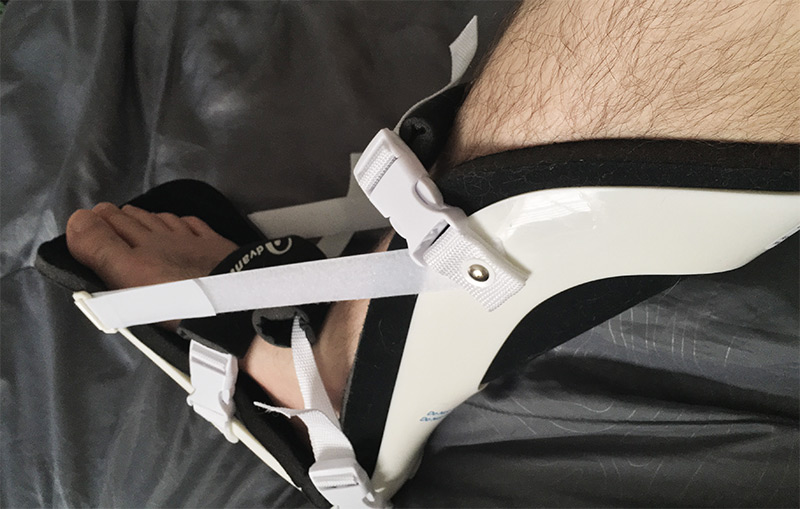 A night splint I ordered off Amazon

This night splint holds my foot at neutral. It’s designed for bed use, and despite looking quite large, is lightweight and hard to notice (especially compared to the boot).

I’ve been walking, in the cast and now an orthopedic boot, for three weeks. But it’s only been in brief bursts around the house.

Toward the end of this week, I pushed my walking limits, going on a day-long trip where I ended up walking around a large grocery/retail store. According to my fitness tracking data, the 5,400 steps were the most I’ve moved since before the injury, and all this walking made me tired.

Fatigue is a danger area. It’s easy to make mistakes when exhausted. So the moment I noticed exhaustion (both mental and physical), I slowed down and took my time.

The week was capped off with another followup consultation with my doctor. This one was quick in and out, with nothing of note, as I’ve had no problems and everything has gone well recently.