Two months down! Regarding the potential for re-rupture, my surgically repaired Achilles tendon is nearly out of the greatest risk zone.

Immediately following the injury, there was a palpable gap at the point where my Achilles tendon tore.  After surgery, that gap was a dent, and my body has been slowly filling in that dent with scar tissue. The last few days, I noticed that the dent is now down to a dimple, and when I bring my foot to neutral, the tendon is starting to stand out. For me, that’s the most obvious illustration of my improvement.

But there’s still one major challenge in front of me — shoes.

The first four weeks, I was in an immobilizing fiberglass cast. The last four weeks, I’ve been wearing a removable orthopedic boot. The cast and boot served to immobilize and protect my healing Achilles tendon. Shoes remove that safeguard.

At the eight-week mark, before my doctor was officially set to give permission, I decided it was time to try shoes. I justified this experiment by planning to take it slowly, and stop if anything didn’t feel right.

On the advice of other Achilles tendon recoverees, I chose a pair of sturdy trail shoes. The idea is to give your heel some extra support.

My first steps went well. I moved around, but it felt like I was walking with someone else’s foot. Though I had been putting weight on my foot for weeks, the experience of a shoe was odd. Almost like I was wearing it for the first time. The healing Achilles tendon stretched and did its job without any pain, though the muscles surrounding were stiff and sore.

I also tried walking around barefoot. It’s more difficult than walking in shoes. In shoes, I can at least approximate a normal gait (if moving slowly enough), but barefoot I walk with a significant limp.

After a few days of shoe experiments, I reached the nine-week mark, and went into the doctor for our scheduled consultation. He inspected my tendon, and advised that it was time to get rid of the boot. We also talked about physical therapy. Most patient blogs I’ve read include a long period of physical therapy — my doctor told me it may not make a difference, and that just walking and returning to a normal lifestyle will naturally accomplish that. That surprised me, but I still want to move forward with physical therapy.

As of this writing, that consultation was the last time I’ve worn the boot. My walking is improving (albeit incrementally) every day. 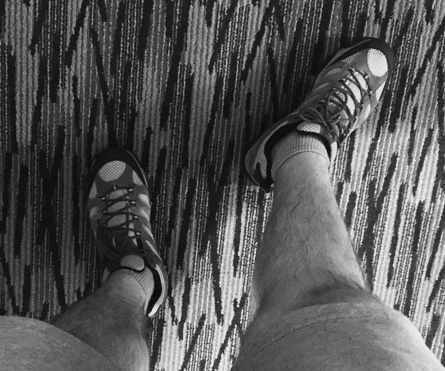 While walking, my foot wants to take a sideways angle. I have to manually correct for this, and go slower.

There’s still a long way to go. The step in my right leg has no power when I push off.

Curiously, the healing Achilles tendon is no longer the problem. Rather, the problem is everything else. Nearby ligaments and calf muscle withered away because they’ve barely been used for the last 9 weeks. Judging by other recovery patterns, it will take months for these friends of Achilles to return to their former glory.