Using the cast shoe, I’ve been able to start moving around. Week 4 (last week) featured a major progression from crutches, to limping around roughly without any crutches. My plan moving forward was to even out my stride and stop limping; to that end, I have been successful. Once I got used to it, the cast shoe’s rocker sole was effective at emulating a natural step, and I was able to walk somewhat normally, with each foot moving ahead of the other (albeit, small steps).

All this movement takes its toll. My foot and ankle had gone weeks without real use, and so even light amounts of walking get them pretty sore pretty fast. Although I had weaned myself off painkillers, I’ve had to take some to get comfortable at night.

Walking with full weight bearing was my goal for the first four weeks, and I’m stoked to have met it.

Friday was set to be the big day, with my cast coming off. But before I jump into that, let me add some more background on how orthopedic surgeons rehabilitate patients after the initial 2-4 weeks.

Patients are placed into immobilizing casts (or boots) casts so that their foot stays at one angle, and there’s no pressure on the Achilles tendon. Gravity equinus, which is the natural resting position of your foot if you just let it dangle, is a standard angle for initial healing, whether you have open surgery to repair the tendon, or go with non-operative treatment. For my foot, gravity equinus is 50° below horizontal, or 50° of plantar flexion.  This angle gives the tendon the best opportunity to heal.

As the Achilles tendon heals, patients are moved from gravity equinus, toward neutral (plantigrade), where the foot is perpendicular with the leg, like if you are standing straight up. Because this change will stretch the tendon, and stretching can hurt, it’s common for patients to progress stepwise, going from gravity equinus, to 30°, to 25°, etc, as they feel ready.

Once you get above neutral, you move into dorsiflexion. When you are walking, your foot will dorsiflex about 20° above neutral. So the difference between where your foot’s plantarflexion and your foot’s dorsiflexion is known as range of motion, or ROM. Initial physical therapy visits often focus on improving the healing leg’s ROM.

On Friday, I went into the doctor’s office for my second post-operative consultation. As mentioned last week, I brought along a VACOcast orthopedic boot, which is highly recommended by folks who have recovered from Achilles tendon rupture. Aside from the angle being easily adjustable, you can also set the boot to allow a limited range of motion (this is known as a hinged boot). Some recovery patterns use a hinging action, others don’t — but it’s nice to have the option.

Here’s where a problem emerges. Prior to Friday, I didn’t have a firm grasp on my doctor’s rehabilitation plan for me. All I knew is that at the four-week mark, the cast would come off, and my leg would go into something else. I had hoped the next stage would be an orthopedic walking boot, but an alternative is to go into another immobilizing cast. A removable boot gives you the option to shower and sleep normally, and to do range of motion exercises; a cast’s primary advantage is that patients can’t screw it up. It’s not that doctors don’t trust removable boots, it’s that they want to keep patients safe from themselves.

On Wednesday, I found out (over the phone) that the plan was for an immobilizing cast, at plantigrade, for a further six weeks.

Questioning a doctor’s plan is a tricky area. They go to medical school, they have experience, they know what they are doing. Reading a few things on the web and stubbornly acting you like you know better than they do — that’s not the way to go. Still, I wanted to move into this orthopedic boot, so my plan was to bring it along, ask about it as an alternative, and get the doctor’s opinion. If he was adamant about a cast, I would give in without much resistance.

Thankfully, my doctor was receptive to the alternative. I explained my reasons for wanting to go with the boot, and after warning me about the danger of cheating with the boot off (like trying to walk to the bathroom in the middle of the night), he left the decision up to me. You know what I opted for. 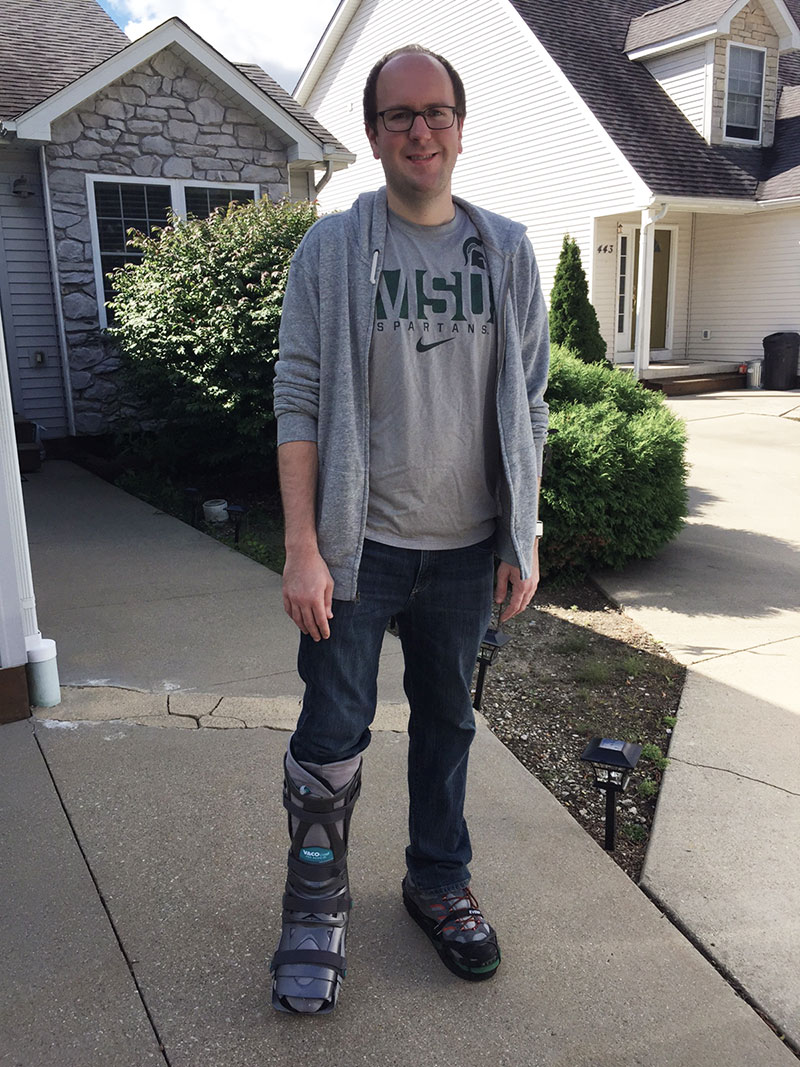 Me standing outside home, two days after moving into an orthopedic boot

Though I ended up with what I had hoped for, I did have to work for it by extensively researching rehabilitation patterns for acute Achilles tendon ruptures. I’m glad to have put in the time to understanding what happened, and how I’m going to get better.

While the VACOcast is certainly more comfortable than the cast was, there’s some pain and discomfort associated with the change in angle. Moving from 50° at gravity equinus to 10° plantarflexion (below neutral), my tendon has complained about being stretched. But it’s getting used to it, and I plan to move to plantigrade (neutral position) within the next week.

My favorite moment so far was the first shower sans cast protector. Though I was seated firmly on a shower chair, being able to wash my entire body was a cathartic experience. Without getting into too much detail, dead skin builds up underneath the cast and has to be scraped away. There was quite a bit at four weeks, so I hate to think about what it would be like at 10 weeks if I had gone into another cast.

One final note for Week 5 — the muscle loss in my right calf doesn’t seem too bad at this point. Compared to my left calf, it’s a tad smaller, but it doesn’t resemble a twig like other Achilles tendon rupture recoverees have experienced.