Last week, I received permission from my doctor to use a removable orthopedic boot rather than go into another fiberglass cast with my foot at neutral/plantigrade position.

The only real challenge thus far has been adjusting the angle of my foot. As I’ve previously discussed, a major milestone in Achilles tendon rupture recovery is to move the foot to plantigrade, like when you’re standing straight up. The first four weeks post-surgery saw my foot fixed at gravity equinus (50 degrees plantarflexion for me), and I strolled out of last week’s consultation at 30 degrees plantarflexion. Over the last few days, I’ve successfully brought that angle up to neutral, but each adjustment stretches the healing tendon, causing both discomfort and swelling. Thankfully, the discomfort dissipates after 24 hours.

With swelling down, I’ve been able to discontinue leg elevation. This is a huge win for me, as for weeks I was unable to be comfortable without my leg resting above the level of my heart. Though I had a nice medical-grade elevation cushion, the past month has featured the least comfortable sleeping positions of my life.

But now, the elevation cushion joins my crutches and hands-free crutch, sitting unused in the bedroom corner. It’s practically a museum for my recovery. 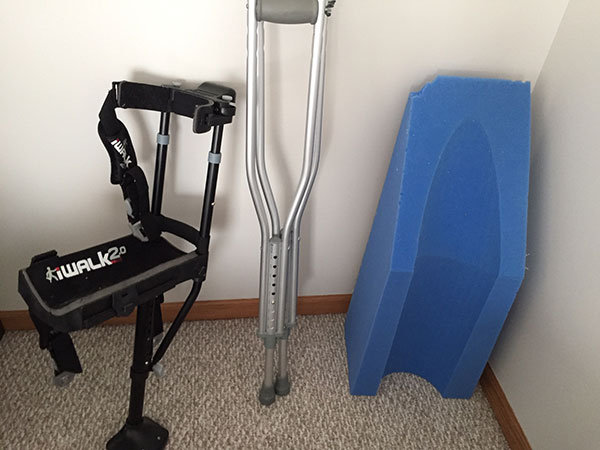 A quick note about the hands-free crutch: it served me well. Just a week ago, before the cast came off, I was thinking about how the time was fast approaching that I would take the hands-free crutch off, and never put it back on. That moment came and went without any recognition. I’m even feeling a dash of nostalgia for the initial days following the injury, and how the hands-free crutch was the only way I could get around.

The last major hurdle in restoring general normality is driving. Because my injury was to my right leg, I’ve known that any return to driving will require a healed leg, or special arrangements.

Over the weekend, I practiced operating the accelerator and brake with my left foot. It’s not as smooth as my right foot has been, but I was able to drive safely. And that’s what’s important here — I have had no intention of driving again until I can do so safely.

I don’t think I’ll be going on frequent errands, but it’s nice to have the option.

When can I ditch the boot?

Since my plan was originally going to be a plantigrade cast for six weeks (after being in a gravity equinus cast for four weeks), my doctor will likely want me in the boot until I’m ten weeks post-surgery. However, that’s a tad conservative, as the median timeline for other Achilles tendon rupture patients is to progress to shoes at the eight-week mark. And I’ve read several accounts of doctors putting patients into shoes (while at home in a safe environment) at the six-week mark.

While it’s neat to think that I could be walking in shoes as soon as this upcoming week, I have no intention of risking re-rupture by rushing things. The boot works fine, and I feel safe in it.

My personal goal for week #7 is to start sleeping without the boot. Other Achilles tendon rupture patients receive permission to sleep sans boot around four weeks post-surgery. I’m well beyond that window, but even though it’s safe, I’m still not psychologically comfortable falling asleep with an insecure foot. So I’ll be working to overcome that mental barrier, possibly by using a lightweight night splint.