The past week has had both ups and downs. As previously mentioned, at my first followup appointment (three days after surgery), my doctor gave me permission to bear as much weight as tolerable on my recovering leg. To even make this possible, I was prescribed a cast shoe which fits over the bottom of the cast, and my doctor said he wants me to be able to walk, without crutches, into my next consultation three weeks from now.

There are several reasons why early weight-bearing is beneficial: (1) motivates the recovering patient, (2) helps to properly align collagen fibers in the healing Achilles tendon, and (3) reduces loss of calf muscle, which atrophies during non-use.

However, early weight-bearing is hard. My initial return to walking is made most challenging by a complete lack of confidence in my leg. While the fiberglass cast protects my healing Achilles tendon, it also numbs my brain from being able to listen to my body, and understand my limitations. I simply have no idea if what I am doing is good, or putting me at risk of a re-rupture.

Further, my cast, which points my toes downward to protect the healing tendon, makes my right leg longer than my left leg. Add on the cast shoe and suddenly there’s a gap of several inches. To close the gap, on my left foot I now wear a shoe fitted with an insole, and an EvenUp Shoe Balancer. I even had to add another flip-flop in there, but now my legs are even and my hips are happy (though I’m still not even close to walking without crutches). 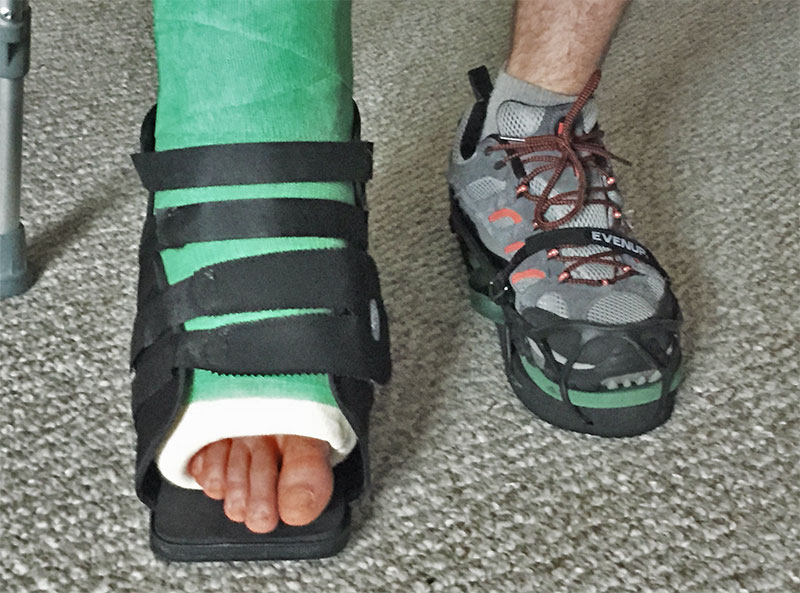 On Wednesday, at a point of peak frustration, I fell to an emotional low. I’ve had a lot of time to read blogs written by people who have recovered from Achilles tendon ruptures, and there are two things that kill me. First, a lot of folks are put into walking boots right away (I won’t go into one until four weeks post-surgery), and walking boots are considerably more comfortable than fiberglass casts. Second, people talk about how quickly the time goes by. For me, it’s crawling at a snail’s pace.

By Thursday morning, I was feeling okay. I realized that I’m in a much better situation than most people recovering from an Achilles tendon rupture, in that I can work from home, and I have an exceptional support system.